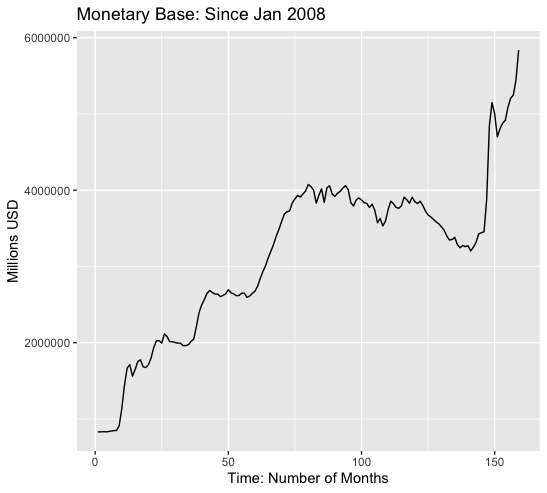 Recall the definition of inflation: “Any Increase in the economy’s supply of money not consisting of an increase in the stock of the money metal.” ~Murray N. Rothbard, Phd from “What Has Government Done to Our Money?”

After understanding the definition of inflation, review the chart listed here in this article. It shows the growth of the monetary base since January 2008. Clearly, the trend for monetary base expansion demonstrates an upward trend since 2008. This can be explained by all the bailouts, repo agreements, stimulus packages, and etc that have been done during this time period by the Federal Reserve and US Government.

People conflate the notion of increase in prices as inflation. The increase in prices occur after the monetary base has been expanded beyond the amount of money metal. Note: Prices can rise due to other factors, such as increased scarcity for a resource. That is not the focus of the article.

This is why Gold, Silver, and Bitcoin is so appealing to investors. These assets allow for investors to hedge against inflation, and store value for future consumption across time. Their current amounts can not be increased by a governing body.