Due to the government’s shut down from the SARS-Covid-2(Covid-19), many businesses are feeling the economic impact of these measures. This policy, to minimize contact and maintain a certain amount of space between individuals( social distancing), alters the way businesses can operate.
If, for example, a business has a large amount of cash reserves, it maybe able to maintain its operations, meet payroll for its employees, and push through this shutdown period. However, for many small businesses, that is not the case. Since payroll is the largest expense to a business, employees are let go. These employees now are unemployed, now there means to generate income is via unemployment insurance benefits. What about the business owner? What is his fate? He(she) will be living off of the capital accumulated; assuming there is capital accumulated.

The graphs listed below show the impact of the unemployment statistics(some) for March 2020. Service industry(restaurant, bar, hospitality, and travel) are impacted the most by the Covid-19 policy measures. It is safe to assume this sector is also one of the highest filers of unemployment insurance. At this point, I do not have any data to support that claim, as it is simply a hypothesis. Nonetheless, hopefully many businesses can re open soon, and begin earning handsome profits.

What do you think of when you hear the phrase “gender pay gap”? Perhaps you think of a man and woman who work exactly the same job at exactly the same place, but he gets paid more than she does. This sort of discrimination has been illegal in the United States since the passage of the Equal Pay Act in 1963.

The gender wage gap. Is it a valid concern? The notion that there is a wage gap between males and females leads to deeper debate and discussion. From an economic perspective, utilizing a priori reasoning, it is not difficult to perform an analysis on this issue—this will trace back to some fundamentals of human action: Man(woman) moves in his/her self interest, since that self interest is subjective to that individual, and each individual is unique with their various talents and skills; these things will lead to various outcomes. When these outcomes are quantified and aggregated, it will show an inequality of results. These outcomes do not mean things are “unfair”, they simply mean a deeper understanding of this labor situation must occur.

However, many propose trying to “balance” those results. Prima facie, that seems plausible, the economic cost would outweigh the benefit of making things “equal”. A slight digression: There is nothing equal occurring in nature. To state something is “equal”, this precisely means the two things in question are identical. Things that occur in nature maybe similar, but they are not identical. For example: No two trees are not equal, no two zebras, no two apples, and so on. How does one make two zebras equal? One can not. Well, they can make the attempt, but at what cost?

Since making things equal is against nature, the economic cost will be extremely high. This is not necessary if the objective is to have optimal productivity in a marketplace.

Let us assume that this issue could be resolved. Factually speaking, it is not an issue that can be “resolved”, per se, but this is a transcendental polemic being presented here. The question must be raised: What conditions must occur in order to have an inequality in wages between the two genders? To prove inequalities in wages, one would need to examine the variety of careers, based upon the break down between the two genders. For example, an analysis would need explore how many men work in certain fields, and how many women work in those same fields. There are a multitude of variables to consider, as it is not simply that men make more than women. Perhaps it is because men and women have different career preferences? Maybe it is the fact that some men have different skills than other men, and women women have different abilities than other women?

The AEI institute has a chart displaying the choices of college majors by men and women over long period of time: 1971 to 2017. It is safe to presume that the choice of a college major is mainly dictated by the personal preference of those individuals. Another safe presumption: That student’s choice in major dictates his/her career path. Consequently, this choice impacts his vocation, which dictates his/her salary, and etc. Since those choices are subjective to the individual, the outcomes will vary. Featured below is a chart from the AEI Institute (the link to the article) supporting this claim…read and enjoy. 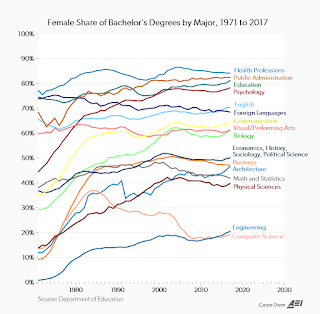