A very profound quote from Ludwig von Mises regarding the relationship between Economic Savings and the Expansion of the State:

“The policies advocated by the welfare school remove the incentive to saving on the part of private citizens. On the one hand, the measures directed toward a curtailment of big incomes and fortunes seriously reduce or destroy entirely the wealthier peoples power to save. On the other hand, the sums which people with moderate incomes previously contributed to capital accumulation are manipulated in such a way as to channel them into the lines of consumption.”


This chart below shows the decline of the savings rate since the 1960s in the United States.

This chart below shows the expansion of Government spending since the 1940s. This chart shows the political party in the White House, but it most be noted that the Congress also plays a role in the budgetary process. The majority party in Congress during the respective time intervals is not listed in this graph. 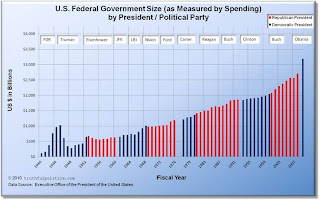 Yes, there are other variables to consider in this simplistic analysis, but the question remains: Is there a direct correlation as Mises suggests in his quote?